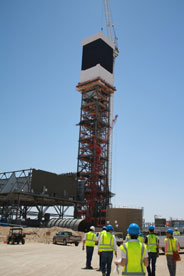 Following a request from the South African utility Eskom to the World Bank to organize a practitioners’ forum on concentrated solar power (CSP), ESMAP invited a delegation of international experts to attend the World Renewable Energy Forum (WREF) in May, followed by a tour of CSP facilities. As well as South Africa, participants joined from Morocco, India and Mexico—countries where the World Bank is involved in helping plan or support the scale up of CSP.

WREF, which was held in Denver on May 12-17, included over 200 sessions and panel discussions on topics ranging across the spectrum of renewable energy, including distribution and transmission, climate change impacts, and energy access issues.

On the third day of the Forum, ESMAP hosted a session on “Meeting the Dual Goal of Energy Access and Sustainability—CSP Deployment in Developing Countries.” The presenters included Rajiv Bansal, Secretary of India’s Central Electricity Regulatory Commission; Vijay Gulati, Additional General Manager from the Indian utility NTPC; Ayanda Nakedi, Senior General Manager, Eskom; and Kenza Iraqi, Sustainable Development Manager at the Moroccan Agency for Solar Energy. The main points of the discussion were the status of CSP technology and deployment, the initiatives and policies needed to scale up CSP (and the barriers to expansion), and shared challenges faced by developing countries.

Ms. Ayanda spoke about how CSP—given its ability to provide sustained power—is an optimal solution for the South African market, and provided details on the CSP demonstration plant that ESKOM is planning. Ms. Kenza gave an update on the Moroccan Solar Plan and the Ouarzazate Solar Complex, while also giving a sense of the estimated cost of the complex. Mr. Gulati gave a detailed overview on India’s ambitious Jawaharlal Nehru National Solar Mission, and Mr. Bansal provided details on the regulatory aspects for the mission and outlined the institutional arrangements for it going forward. About 50 participants attended the session—a substantial number given the number of parallel sessions occurring at WREF on that day.

The session was followed by a study tour from May 18-24 to utilities and Concentrated Solar Power plants under construction and in operation in California and Nevada. These included the Brightsource facility in Ivanpah, CA, where a power tower is under construction; the Sierra Sun Tower demonstration plant in Lancaster, CA; the Kimberlina linear Fresnel solar steam generators; and the Crescent Dunes molten salt solar tower in Tonopah, NV.

The group also held a meeting with representatives from Nevada Energy and Solar Reserve in Las Vegas about the Crescent Dunes project. The practitioners compared notes about the evolving costs and benefits of CSP versus solar PV now that the global price of PV has lowered substantially.

Overall the delegates said they believed it was highly valuable to have a chance to network with solar energy experts from around the world, and to learn from peers in other developing countries to better understand emerging common challenges. In particular, the participants valued the opportunity to better understand the challenges of developing and operating CSP plants, and to see first-hand new CSP technologies at projects on the study tour.

Meeting the Dual Goal of Energy Access and Sustainability: CSP Deployment in Mexico