Story Highlights
Can Chile Become a Hotspot for Investment in Geothermal Energy?
By ESMAP/LCR
July 24 2017

What does a country do when it has almost 108 active and dormant volcanoes?

It drills down for steam.

Chile’s abundant geothermal potential provides a good renewable energy option to further diversify the country’s power generation mix – something consistent with Chile’s Energy Policy, which aims for at least 70% of national electricity generation to come from renewable sources by 2050.

Chile has long been the leader of Latin America's renewable energy market. In 2015, investment in renewables, (including small hydropower projects of <50 MW) was around $2.6 billion.

The rate of growth of investment in renewable energy has increased in the past few years, and competition has lowered electricity costs. 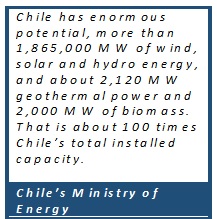 But geothermal energy is lagging. Chile’s only geothermal plant, Cerro Pabellón, which opened earlier this year, is South America’s first operating plant. The Government has tried to develop geothermal energy, but despite a promising start, several issues are preventing further investments in exploration.ESMAP’s Global Geothermal Development Plan (GGDP) was instrumental in mobilizing a US$50 million grant though the Inter-American Development Bank from the Clean Technology Fund (CTF) to stimulate additional investments in the sector. In addition, the CTF approved a grant of US$3 million through the Bank – of which US$1.78 is Bank-executed to provide technical assistance to the government in addressing key legal, social and market barriers and contribute to the development of tradeable geothermal resources.

In October 2016, renewable energy producers in Chile had won more than a 50% share of Chile’s power tender, with falling costs for renewables driving the average bid price down. This results will have an impact on Chile’s electricity system starting in 2022 and positioning geothermal energy to enter the electricity market will be crucial.

Another main challenge Chile faces is garnering public support for energy projects. In the past, Chile has relied on imported fossil fuels and hydroelectric plants, sources that have proved 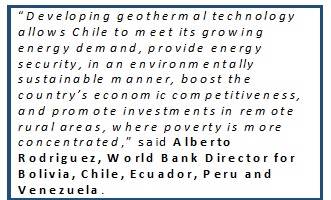 both expensive and unpredictable and expensive in recent years and have been subject to public scrutiny. Communities have increasingly opposed energy projects based on their expected environmental and social impacts. Several large projects have generated public debate and large community protests. Even though geothermal energy could have important benefits, such as help stabilize and secure supply, and minimize environmental and social costs, public trust in its development still needs to be built to move geothermal projects forward.

ESMAP also supported a study tour where Chilean government officials and indigenous communities visited Nicaragua to learn about the country’s experience with geothermal development. Discussions focused on how those living in geothermal project areas, including indigenous populations, can benefit from industrial services, employment and better connectivity, and other gains associated with the sector’s development. The exchanges with peers helped communities shift their mind-sets about geothermal and support its development.