Creating the Second Largest Regional Electricity Market in the World

Scaling Renewable Energy Use in the Philippines

Need to Speed Up Pace of Progress toward Sustainable Energy: Global Tracking Framework 2017

Can Chile Become a Hotspot for Investment in Geothermal Energy?

The Heat is On. But for a Good Cause

The offshore wind industry has grown nearly five-fold since 2011, from 4 gigawatts to 23 gigawatts installed at the end of 2018, and with a large volume of planned projects in Europe, China and the United States. Considering the recent and projected cost reductions, the unique benefits of offshore wind, and the urgent need to decarbonize electricity systems, the World Bank Group launched a new offshore wind program in March 2019. Led by ESMAP, in partnership with the International Finance Corporation (IFC), the objective is to fast-track the adoption of offshore wind in developing countries by helping them to tackle the challenges that often arise with the introduction of a new technology and creation of new markets.

For further, up to date information on the Offshore Wind Development Program, browse this document. 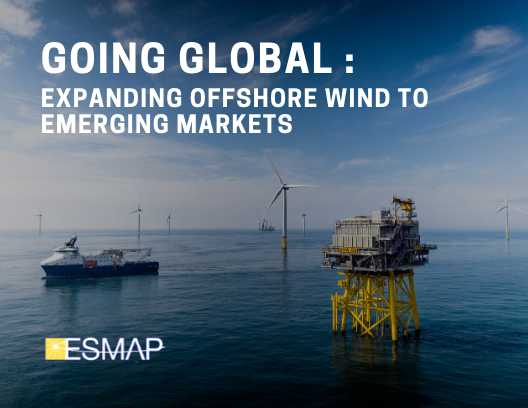 Technical potential is defined as the maximum possible installed capacity as determined by wind speed and water depth. This does not take into account other technical, environmental or economic constraints. The maps linked below indicate an estimated total technical potential of 15.6 TW for 48 emerging markets, including 5.5 TW of fixed potential and 10.1 TW of floating potential.

Data |  Obtain a breakdown of technical potential by technology (fixed foundation or floating) and wind speed category for all countries available through the tabular data.